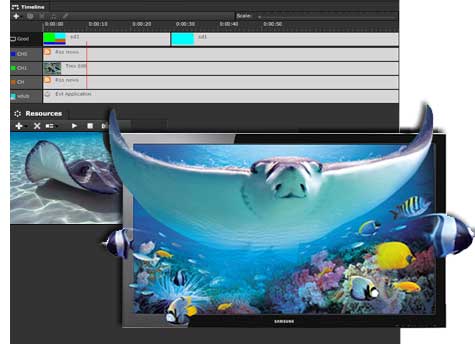 The SignageStudio is a cross platform presentation builder like no other, it is at the core the Digital Signage platform. It is where you will spend most of your time building, configuring, controlling and maintaining your complete digital signage platform. And because the SignageStudio plays such a vital role in the success of your final product, we felt we had to deliver an amazing platform which can deliver ease of use without compromising functionality; and that’s exactly what we did. Using the Studio application you can create any number of campaigns. The campaign unify a set of timelines which together construct your final display output. Below are some of the key features that are part of the Studio. 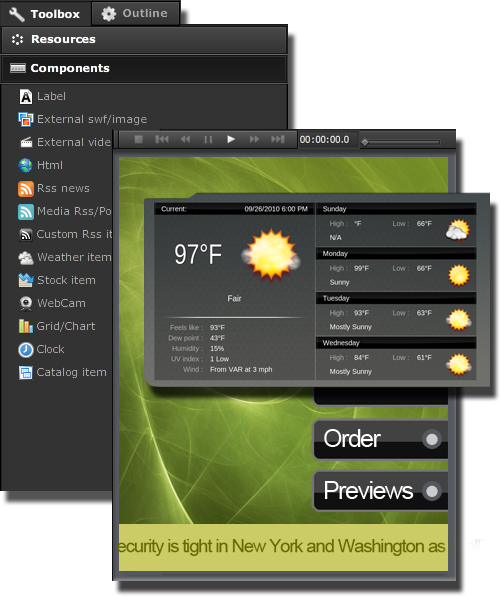 The campaign is a global configuration which holds your complete digital signage setup. Having the ability to configure multiple campaigns allows you to easily switch your signage players from one configuration to another.

Timeline
A timeline is a visual representation of the sequential play list order of your media resources. A collection of all your timelines make up the final output of your digital signage presentation.

The Station manager empowers you to remotely control all of the Signage Players. You can reboot, play, stop, update software, get statistics and more. All this from within the comfort of the SignageStudio station manager.
Screen division divide the screen into separate areas (AKA Zones). Areas are assigned a channel number in which you can run independent content. Included in our software is a powerful screen division WYSIWYG editor

Screen division divide the screen into separate areas (AKA Zones). Areas are assigned a channel number in which you can run independent content. Included in our software is a powerful screen division WYSIWYG editor. 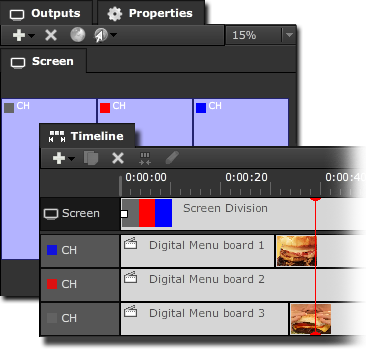 The sequencer is essentially a simple and effective way to serially set the play list order of all the timelines. This is done using simple drag and drop operation.\

Set your timelines to play at any day and anytime. Use the schedular to set the exact start and stop times. A graphical interface is used to get a summery of all future playlists and easily resolve conflicts

Build your own Advertising network, provide to your customer proof of play, visual analytics and more. Each customer can be managed through the sub-account manager.

Resources
Resources include any media content which loads onto your digital SignagePlayer. These include video, sound, signage components and scenes. Also provided are social network portals that retrieve shared files. These portals include social networks as well as our own built in digital signage social network.

Components
The components include many valuable tools that you can use to enrich your signage presentation. These include RSS News, Stock tickers, RSS Weather, RSS Video Podcasts, HTML component, TV Tuner / Capture card, clocks and more. Components can be used directly on the timeline or within a designer scene.

Scene Editor
The Scene Editor is a canvas where you can mix multiple components and resources. You assign a Scene to one or more screen divisions (also known as zones). The Scene editor is a fully customizable widget editor with built in animation, effects and control of the X / Y coordinates of all the items it holds.

CSS
Set the color and font scheme that’s right for you. With our flexible CSS controls you can set the SignageStudio to match your style and preference.

A powerful tool that allows you to easily display unlimited number with a common format. The items can be viewed inside any number of catalog
sub-players which include carousals, book flipping, 3D floaters and more.

With active digital signage components your SignagePlayer  is energized with dynamic live content. Instead of just running static videos and images, you can integrate Live TV, RSS, Weather, Facebook, QR, Twitter, Kiosk builder, Stocks, YouTube and dozens of other cool, live, relevant content that is sure to bring your screens to life.